America’s Rifle, the AR-15, and similar sporting rifles are unique among firearms in that they have both upper and lower receivers. Many other firearms have only a single receiver, or a single frame, that is serialized and regulated as the actual “gun.”

With sporting rifles, the lower receiver, which often comes as a part of a lower parts kit, is the “part” that accepts the trigger assembly and is serialized; it’s the part that the ATF considers a firearm.

Buffer tube kits don’t usually come with lower parts kits - but to understand the impact they make on the shooting experience, let’s take a step back and see what makes lower parts kits so popular.

Why Are Lower Parts Kits Popular?

One of the main reasons that lower parts kits are so popular is that currently, the ATF does not recognize receiver blanks as firearms. A receiver blank is a lower receiver that has not been finished and does not have the cavity for its FCG (fire control group). A receiver blank also cannot accept a safety, trigger, or hammer and so cannot be used to create a functional firearm until it has been completed.

There’s more: The ATF not only does not consider receiver blanks to be firearms but has also specified that it is legal, at least at the federal level, to complete a receiver blank at home for the purposes of assembling a finished firearm. Provided the person who creates the firearm creates a model that is not federally prohibited, is not a prohibited person him or herself, and creates the firearm for personal purposes, it is legal.

With that said, state laws vary significantly and some states have outlawed the purchase, possession, or alteration of 80% lowers outright. Nothing in this article can be construed as legal advice; before taking up a project associated with a receiver blank, always do your own research and seek professional legal counsel, preferably from a firearms lawyer, regarding the legality in your location.

Because some shooters create their own firearms from receiver blanks, lower parts kits are popular for tying the package together. After a complete lower assembly is finished, a completed upper, barrel, gas system, pistol grip, and stock can be added to it to complete a functional rifle.

What Comes with Lower Parts Kits?

Just what will come with a lower parts kit will vary, depending on the model. However, you can expect most complete lower parts kits (without the receiver itself) to come with the following.

-A mag catch assembly with the button and spring

-A safety selector lever, along with the safety spring and detent pins

-A bolt catch assembly kit with a plunger, spring, and roll pin

-A trigger and hammer

Some lower receiver parts kits may also come with an extended trigger guard as well as pistol grip screws and lock washers, making them complete kits (minus the receiver) to construct a complete lower receiver assembly.

Most lower receiver parts kits come with something else that is critically important and affects the shooting experience as directly as the trigger assembly, adjustments, sights, or bolt carrier group.

Most lower parts kits come with a buffer tube detent plunger and retainer spring - to which you will add your buffer tube and stock.

Don’t overlook the buffer tube kit you pair with your AR. It makes a huge difference.

A sporting rifle’s buffer tube attaches to the lower receiver and serves two important purposes: it serves as the anchor point for your rifle’s stock and houses the buffer weights and springs.

Serving as the anchor for your stock is obviously important enough, but it’s the buffer recoil system that is so important, and which can easily be overlooked.

Some of them might even be wise enough to suggest adjusting the buffer tube system, which has a profound impact on recoil management.

What some shooters may not realize is that by adjusted the weights inside of the buffer tube, or even the spring, you can significantly adjust felt recoil, and perhaps even improve cycling time - but let’s talk about recoil.

Within reason, the heavier the weights inside the buffer tube, the more of the force of recoil will be absorbed by the firearm and the less will travel through the platform into your shoulder. By adjusting the weights in the buffer tube, you can cut back on the effects of felt recoil. In addition, you’ll be shifting the center of gravity closer to your body, making the platform more responsive and maneuverable.

Choosing a different recoil spring may have an effect on perceived recoil, but here’s what it can do. A stronger spring may potentially improve cycling time, all else being equal. However, poorly matched weights and springs can result in short cycling or failure to feed, so it’s important that you don’t just start aimlessly changing them.

It’s important to choose a buffer tube kit, with springs and weights that are suitable for your platform and cartridge - which is why we’re here to help. 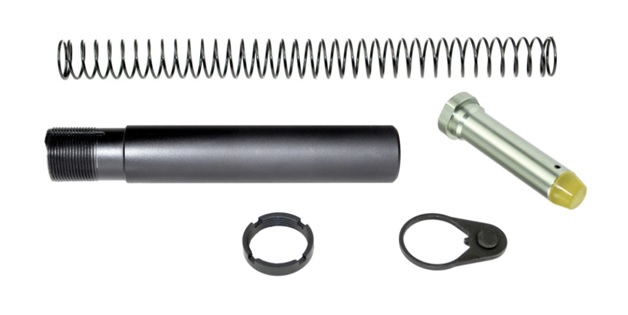 While it’s true that upgrading your buffer tube system may improve the handling, cycling time, and recoil of your firearm, it’s important that you make the right decision when you’re building your own right - or just customizing it.

If you have any questions or would like recommendations, call us up at 239-848-6757, let us know what you’re building or what loads you’re shooting, and we’ll be happy to help with the project.