What’s the first thing you do when you pick up a firearm and the action is closed? Naturally, you open it to ensure that the firearm is clear, before inspecting it, disassembling it, cleaning it, or otherwise. It’s just good, responsible firearm handling acumen. For most of us, it’s second nature.

With repeaters and break-action firearms, this is easy enough. These firearms have levers, slides, bolts, or pumps that make it easy and intuitive to open or rack the action back. The very nature of these firearms makes it necessary for these features to be readily manipulable. A lever is easy to access, with either hand, with gloves on, for example; the support hand naturally rests on the forend of a pump or slide action rifle or shotgun.

But what about autoloaders? Let’s take a closer look.

The Purpose of the AR 15’s Charging Handle
A firearm like an AR 15, which is an autoloader, lacks a slide or a lever. Instead, you can manipulate the action, racking it back, by pulling on the charging handle. This is the external protrusion from the bolt that makes it possible for you to manually cycle the action.

Also known as the cocking handle or bolt handle, the AR 15 charging handle is not only vital for the purposes of visual inspection and clearing a weapon. It is also your lifeline if the firearm jams, fails to set properly when the bolt is closed, or experiences some other failure of the action.

Manually cycling the action by way of the AR 15 charging handle is the only way to manually reset the hammer and striker, extract a cartridge that failed to extract or eject, or otherwise to
clear a jam.

It may not be a flashy or an exciting component of the platform, but it is one of the most utilitarian, by far. It, more than almost any other feature of the firearm (except perhaps the trigger and stock) affects the ergonomics of the rifle.

Now, to a point, training with your weapon will make it second nature - but there are still some ways you can improve the handling of your weapon, as well as your proficiency with it, even with a move as simple as upgrading your AR 15 charging handle. 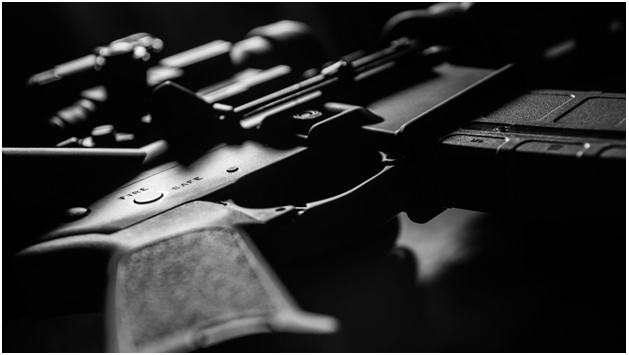 Advantages of Upgrading an AR 15 Charging Handle
First, let’s just talk about mil-spec and debunk a few things. Mil-spec does not automatically mean better - all it means is that it has been produced in accordance with stringent military specifications.

Recall that mil-spec BCGs are given a phosphate finish. It’s good enough, reliable, and standard for the military, but other BCGs with nitride and nickel boron finishes are harder, more corrosion-resistant, and exhibit superior permanent dry lubricity.

In that respect, many non-mil-spec bolt carrier groups are “better,” in multiple ways, than mil-spec, phosphate models. The same can be said of mil-spec AR 15 charging handles.

Yes, mil-spec charging handles are made from tough, corrosion-resistant T6 aluminum. They work, for sure, but they’re not ambidextrous and they have pretty small latches. This makes them difficult for left-handed shooters to manipulate, hard to find in the dark, and difficult to access in the cold or with large gloves.

But lefties are not the only ones who will profit from an upgrade to the AR-15 charging handle. There are numerous reasons why some hunters or sport shooters could benefit from larger models with more adequate grips.

For one thing, if you’re a competition shooter or a hunter, then there’s a good likelihood that you spend a lot of time outside in the winter. It’s hard enough getting to the charging handle to clear or cycle a weapon with cold, stiff, bare hands, and nearly impossible with bulky gloves. A larger charging handle will give you much more purchase and make it a lot easier to feel what you’re doing, without necessarily needing to look down at your weapon.

Now let’s talk about hunters. It’s not legal or even common to hunt with semi-autos in many states, but where it is, the AR 15 is common. It’s America’s Rifle for a reason.

Game like hogs are wily, fast, and aggressive. They can be downright dangerous, making rapid follow-up shot capabilities an imperative. It also means the hunter must be able to confidently handle, fire, cycle, and clear his or her weapon without any hiccups.

What it boils down to is easier access to the charging handle, even in the dark, when there are attachments in the way, or when wearing thick or bulky gloves - not to mention that some models also allow for ambidextrous use.

Check Out Some of Our Top Options
Do you have questions about upgrading your AR 15’s charging handle, or would you like to learn more about how to replace it? Check out our collection of charging handles via the previous link and get in touch with us if you have additional questions. You can reach us at 239-848-6757 or by email at Sales@MCSCGearup.com.